The University and World War I: a centenary commemoration 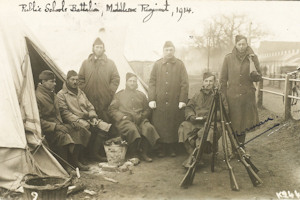 The conflict had a significant impact on the University and its community. As a centre of knowledge, expertise and personnel, the War saw our predecessors play a diversity of roles in military, medical, relief and agricultural service, through research and in efforts for peace.

The centenary commemoration event will mark the impact of the War, the University’s contributions and all those whose lives were affected and lost. It will feature readings from academic staff, senior officers and students of the University, original music composed and performed by current students and opportunities for reflection.

President and Vice-Chancellor Professor Dame Nancy Rothwell said: “The First World War had a significant impact on the University and its community and one hundred years on it is fitting that we commemorate, with a great sense of pride, the contributions of our students and staff, including, of course, those who lost their lives.”

Dr James Hopkins, University Historian and Heritage Manager and Honorary Research Fellow in the School of Arts, Languages and Cultures, said: “The University made diverse contributions to the war. Over 600 staff and students from the University lost their lives in military action. Many members of the University community volunteered for roles that provided relief and care for the injured, took up essential work in fields and factories and assisted those displaced by conflict. The University also made significant research contributions including treatments for gunshot wounds and the effects of shell shock, measures to counter the submarine threat to shipping and work to increase bread production. The University has a strong community of students, staff and alumni that existed both then and now, so it’s important that we mark the contribution of our community and those whose lives were lost or changed forever."

The service will feature: