A bloodcurdling image with impact 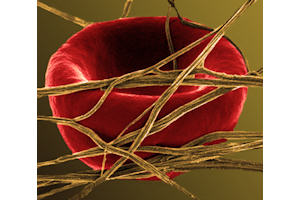 This amazing image was runner up in the Biotechnology and Biological Sciences Research Council (BBSRC) Images With Impact photo competition.

Entered by a research team led by Professors Douglas Kell from the School of Chemistry and Resia Pretorius from The University of Pretoria, it shows what happens when our bodies are wounded.

When a wound occurs, the body reacts by activating the ‘clotting cascade’. A fibrin fibre network is formed that, much like a fisherman’s net, entraps red blood cells (RBCs) to prevent the body from bleeding profusely.

The BBSRC launched the competition, seeking the best images that showcase UK bioscience and its importance in everyday life, as part of its 20th anniversary programme.

The image was displayed at the Great British Bioscience Festival and can be seen at: