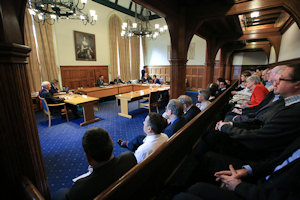 Organised by Policy@Manchester, the evidence session was a first for the University and a rare coup for Manchester and the north of England.

The committee heard evidence from HS2 Ltd chair, Sir David Higgins, in a well-attended session with a packed public gallery and media bench.

The HS2 boss is required to regularly report back to parliament on his work and was grilled by the four attending MPs on the progress of the controversial high speed rail project – the government’s flagship transport scheme – and in particular its roll out to the north of England.

The one-hour session covered a broad range of topics including the timetable for delivery to the north of England, project costs, Sir David’s relationship with government ministers and officials and his future at HS2 Ltd.

He used his evidence session to emphasise the need for improved connectivity and capacity across the north of England, praise the collective voice and approach of leaders in the region and back a desire to deliver 98% of contracts to British firms in the delivery of high speed rail. He confirmed that the first high speed train should travel into the centre of Manchester in 2027 with a high speed line to follow before 2033.

Professor Colin Talbot, Director of Policy@Manchester, said: "Select Committees infrequently meet outside of Westminster and even more rarely on a University campus, so we were deeply honoured to host the Transport Select Committee yesterday. It is a sign of Manchester's - both as a city and the University - growing importance as a centre, and especially our growing influence in public policy issues."