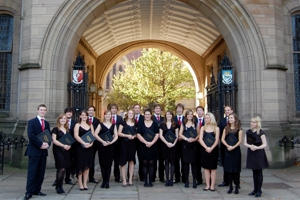 Ad Solem, The University of Manchester Chamber Choir, has won first prize in the recent North Wales Choral Festival 2014 in the Mixed category.

They battled against ten other choirs to win the top prize of £500. The prize money will be used for activities organised by the University of Manchester Music Society.

The North Wales Choral Festival, organised by Conwy County Borough Council, is considered one of the largest choral competitions in Wales. It is now a three day celebration of choral music incorporating school workshops, competitions, concerts and community performances.

Ad Solem is a student-run auditioned chamber choir based at the University of Manchester as part of the University of Manchester Music Society. The choir enjoys singing an eclectic range of music, regularly performing around the North West of England.  Ad Solem have also been on tours including Hungary, Estonia, and Italy. The choir performs in the Martin Harris Centre for Music and Drama, which is also where they are based for rehearsals.