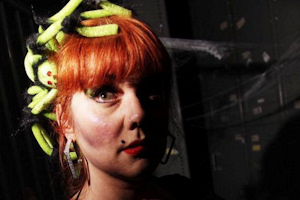 Charlotte joined five other fundraisers (including some celebrities) in an underground vault in the former Lloyd's Bank building at 6pm on Halloween, where they worked with ghostbuster Stuart Marshall to investigate paranormal activity deep beneath the city. The picture shows her on the night in full Halloween make-up and fancy dress (image courtesy The Vain Photography).

At regular intervals, the participant who had raised the most money for charity by that point was whisked away to a Halloween Ball at St Peter’s Church, Ancoats. Charlotte was the third person to escape from the Hellhole, after raising £591 by 8pm.

At the last count, the event as a whole had raised £3,100 for Forever Manchester. This local charity has been around for the last 25 years, funding and supporting community groups and projects across the Manchester region. It has been involved in a massive variety of projects, from food banks to community cafes, from play club and breakfast schemes, to dementia and children's sports projects.