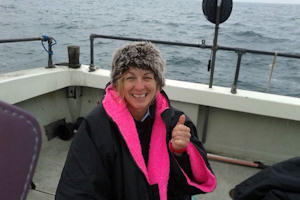 Marylyn Dickinson took on two swimming challenges to raise money for two charities, the Snowdrop Unit at Wythenshawe Hospital and St Ann’s Hospice, in tribute to two of their young patients.

Marylyn, Manchester Medical School’s Undergraduate Manager at University Hospital South Manchester, swam the English Channel in a relay with three friends, and then later swam the length of Coniston Lake.

Her efforts were in support of two friends who were raising funds to thank these two special units for the care and support they provided during the loss of their children.

Marylyn said: “Swimming the English Channel was the most surreal lifetime experience, and one which I will never forget; jellyfish, waves, tides, sea sickness, no land in site in the ‘separation zone’, surrounded by some enormous ships and tankers.

“However, team spirit and thinking of the two children who are no longer with us and their wonderful parents who have been fund raising tirelessly made it a very emotional and special trip.”

She added: “Swimming the length of Lake Coniston is the longest swim I have done to date at 5.25 miles, but I wasn’t nervous as I just wanted to enjoy it and keep swimming.  I got stung many times by jellyfish in the channel and was covered in bites from insects in the aquatic plants at Coniston but still so worthwhile and rewarding.”