University researcher involved in the discovery of a new dinosaur

Dr Victoria Egerton, from the School of Earth, Atmospheric and Environmental Sciences, helped in the excavation and preparation of the specimen - one of the most complete examples of gigantic titanosaurian sauropod dinosaurs ever discovered 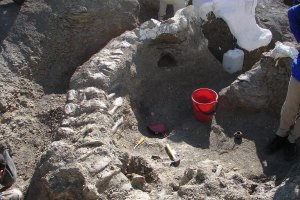 The colossal creature, described in Scientific Reports, may have weighed around 59.3 metric tonnes, and was approximately 26 metres long. The discovery may help us to learn more about these enormous animals.

Titanosaurian sauropod dinosaurs were large-bodied herbivores that were abundant in the southern continents around 66–100 million years ago (during the Late Cretaceous period); the group includes some of the most massive creatures ever to walk the Earth. However, nearly all of these giant titanosaurs are known only from very incomplete fossils, which has hindered our understanding of their anatomy as the shape and dimensions of their bodies are based on estimates from a limited sample of bones.

The new specimen, named Dreadnoughtus schrani, consists approximately 45.3% of the bones expected in a complete skeleton, representing all major skeletal regions. The preserved skeleton helps to paint a detailed picture of this giant dinosaur, which had peg-like teeth, plank-like ribs, and legs larger than most other titanosaurs. Both the humerus (forelimb) and femur (thigh) are well-preserved, and are used to calculate the creature’s mass.

Dr Egerton, a member of the research team from the University who helped in the excavation and preparation of the specimen, said: “This is an incredible discovery because it is pushing the boundary of size, in terms of both mass and length, we expect terrestrial animals can achieve. Animals such as this help us to further understand ecosystems of the past.”

The authors note that despite its estimated mass of about 59.3 metric tonnes, features of the Dreadnoughtus bones indicate that it was still growing at the time of death. Together, the findings may shed more light on the anatomy and evolutionary history of titanosaurian dinosaurs.