On Saturday 4 October, 8pm at the Martin Harris Centre for Music and Drama 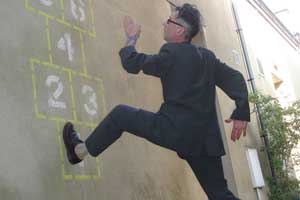 To celebrate his French roots and the early music tradition of the University’s music undergraduates, poet and performer John Hegley will perform pieces inspired by the grumpy, but brilliant Baroque composer and theorist Jean-Philippe Rameau.

Alongside other recent verses about John Keats, polar bears and walnut trees, he will tread the more familiar land of dogs, dads, potatoes and his grumpy, but not so brilliant brother-in-law.

Poet, comic, singer, songwriter and glasses-wearer, John Hegley has captivated and devastated audiences all over the country, in theatres and festivals, at gigs at the Edinburgh Festival, and with numerous appearances on radio and television.

This event will feature the music of an early music ensemble made up of talented University music students, playing in the bar before the event and during the interval.

Deep and daft. Come and sing. Devised largely for adults but has proved tolerable for some 9-year-olds.

“It’s easy to see why John Hegley is one of the country’s most popular contemporary poets.” The Telegraph, June 2014

Suitable for all adults and children aged 9+

Tickets are priced at £8 and are available from: