Muck, sweat and tears to fix Jo in Moscow

Despite being sick herself for the last two weeks before the race, Rowena Harding managed to complete the half-ironman distance triathlon to raise funds for her friend’s stem cell treatment 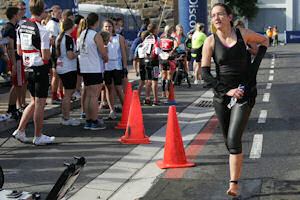 The 1.2 mile swim took place in the River Ure at sunrise, with a bagpiper sending the competitors off into the 14 degrees murky brown waters. The 56 mile ride was tougher, taking place mostly on a featureless stretch of road alongside the A1M – back and forth with only road kill for scenery, the scent of freshly manured fields, and head winds and cross winds. Having trained on the local hills of the Peaks and Pennines near Oldham, 56 miles of flat fast cycling broke Rowena ("! actually cried on the final lap and when bringing my bike back into transition for the run”).

The half marathon was four loops, mostly off road where Rowena was able to pick back some of the places she lost when cycling. The whole event, including transitions, took six hours and 38 minutes.

Rowena recalled: “It was a tough day, and I had lost a lot of fitness in the last two weeks being ill but I made a chant in my head “gotta go Ro, gotta fix Jo in Moscow” which kept me going on the bike. I didn’t really know what I was doing for periods out there but I had spoken to Jodi’s husband before the race and he told me she was in a bad way and that the kids were not coping well with her current condition. If that can’t be a motivation for trivial emotional and physical pain, then I don’t know what is.

"I’m really touched by the donations from people across the University, some who I have not met – thank you so much for making a difference to Jodi’s life and also to her family.”

You can still donate towards Jo's treatment online at: