Success is brewing for enterprising alumni 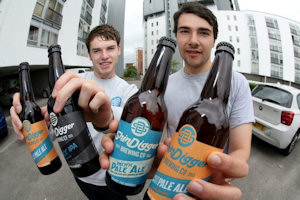 The pair, who studied respectively for the Master of Enterprise (MEnt) and the BSc in International Business, Finance and Economics at Manchester Business School, have entered the world of craft brewing with the help of government funding and now supply to more than 60 stockists in England and Scotland.

“The MEnt degree played a really important part in getting ShinDigger Brewing Co. off the ground,” said Paul.

“It offered the perfect environment to start planning our business. The practical skills we were taught were directly transferable with regards to helping us do this.

"We were also able to get vital mentoring and connections from Manchester Enterprise Centre, which has had a big impact on how far we've come today."

“The students and lecturers on the course also offered a great sounding board for our ideas and gave us useful feedback. A big draw of the course was how much it immerses you into the entrepreneurial world. You eat, drink and live entrepreneurship, with everyone else on the course just as passionate about it as you, so it is a great place to develop and learn.”

Paul and George, both 24, were also finalists in the Venture Further competition in both 2013 and 2014. Paul said: “Venture Further offers a great opportunity to develop a business idea. It forces you to take a deeper look and answer some really tough questions about it.

“There is also the opportunity to get some much needed start-up money to get the idea off the ground.”

George and Paul currently have three beers in their range – the Pacific Pale Ale, West Coast Pale Ale and Black IPA. Now the beer enthusiasts are brewing up an idea for a mobile beer garden and have even been approached by Red House TV company to feature in a documentary about people who have turned their hobbies into careers.