Dame Kathleen Ollerenshaw, former member of the Court of The University of Manchester and Deputy President of UMIST for 10 years, has died aged 101 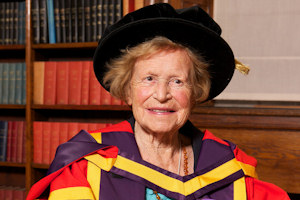 She had been a long-standing friend and supporter of mathematics at Manchester, and had showed strong interest and support for the new University of Manchester and the vision behind the '2020 Agenda'.

Born Kathleen Mary Timpson on 1 October 1912 at 1 Parkgate Avenue, Withington, Manchester, she was the younger daughter of Charles and Mary Timpson, members of the famous shoe dynasty. Dame Kathleen took her BA and DPhil – both in mathematics – in Oxford and has since combined mathematics research with politics, in which sphere she was Lord Mayor of Manchester and an advisor on education to Margaret Thatcher's Government.

She was passionately committed to encouraging interest in mathematics among young people having been deaf since the age of eight and was an inspiring role model to many.

She also had a formidable reputation as an astronomer and the observatory at the University of Lancaster bears her name.

The School of Mathematics runs an annual public lecture in Dame Kathleen's honour.

Dame Kathleen celebrated her 100th birthday with a garden party at her home but soon afterwards suffered a fall and moved into a nursing home.

Head of School Peter Duck commented, “The School of Mathematics hosts an annual 'Ollerenshaw Public Lecture' - presented by world-leading mathematicians - in recognition of Dame Kathleen's contribution to the University, her passion for mathematics, and indeed for her support for the School of Mathematics; Dame Kathleen regularly attended these lectures, which she always relished. I was greatly honoured to be the presenter for Dame Kathleen on the conferment of her honorary doctorate by the University in 2012. The School will miss her immensely.”

A memorial service to celebrate her life will be held at Manchester Cathedral at a later date.