WW1 and us: University launches real-time tribute to the lost

Emotional tributes to the more than 600 staff and students who lost their lives in World War One, each month, 100 years after they died 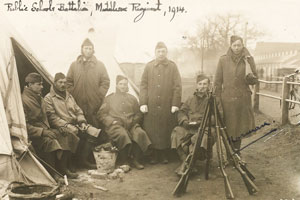 The website was launched to commemorate the centenary of start of the Great War on August 4, with the names of three soldiers.

They are: Gustave Victor Petrus De Boutte, Frederick Albert Forster and Alfred John Harold Ryder Widdowson who died on 18, 23, and 25 August 1914, respectively.
Staff and students contributed widely to the war effort, not only as soldiers but as nurses, technological pioneers and even agricultural workers.
Though basic biographical details exist for all of the fallen - which will be published in a single document on the website – their wider stories have been often lost.
However, Pen Richardson, a member of IT staff at the University with a keen interest in the First World War, who is part of the University team working on the project, is searching the archives to reveal a wealth of lost information which will be published over four years.
She said: “It is difficult to know accurately how many people from the University died in the conflict, as much information is conflicting and replicated.
“And sometimes we may not find anything more than what appears in the University’s official, roll of honour typically: year of birth, course studied or taught ,  rank, military unit,  awards, and date of death.
“But occasionally a remarkable story can emerge from places such as the University archives, newspapers of the time, census or The National Archives.
“My work has been preceded by a number of years of important research into the names on ‘The Tech’ memorial and the history of the Officer Training Corps by former UMIST Vice Chancellor, the late Professor Harold Hankins and his collaborator Neil Shuttleworth.
“I am very grateful for their contribution  which is to be included in the Roll of Honour now being put together.”
One area which is likely to come to light, is the significant contribution the University made to technology and medicine during WW1.
John Stopford, who went on to become the Vice Chancellor of VUM, worked on nerve injuries during the war. The medical school building is named after him. Some 26 medical staff were directly involved in war work helped pioneer our understanding of shell shock.
University electrical and mechanical engineers pioneered the use of radios in submarines and aeroplanes, and helped counter the submarine threat to shipping. They also worked with government departments on how to stretch the nation’s bread supply by incorporating more brewers malt into wartime loaves.
Women from the University often became involved transporting and comforting men from London Road station to the hospitals. Other women volunteered for agricultural work and replaced men in the field. The wives of staff took active part in making and sending ‘comforts’ to soldiers abroad.
Dr James Hopkins, University of Manchester Heritage manager, who is leading the project, said: “As one of the few Manchester institutions whose history extends to the period, our site will provide a unique glimpse into the impact of the war on the University and the contribution of its staff and students.
“It has been important to recognise and remember everyone from our community who was involved with the war, regardless of whether they were fighting on the frontline, volunteer nursing or working the land.
“This website  will grow over time – and we urge the public to get involved and submit their documents and images relating to the University’s role during the Great War.”
You can visit the website at: