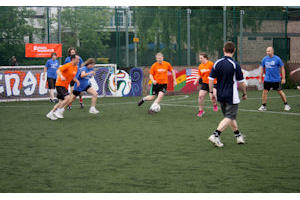 In an energetic and competitive game the teams, Epidemiology Athletic and Genetics and Genomics United played to win the first (Jane) Worthington Cup.

Despite an opening goal by Genetics and Genomics United, the coveted trophy went to Epidemiology Athletic with a final score of an impressive 8 goals to 2 – a result worthy of the World Cup itself!

The winners’ trophy was presented by Professor Jane Worthington, Director of the Institute of Inflammation and Repair.

A charity cake sale was also held in the Centre for Musculoskeletal Research throughout the day raising further funds.

Organiser of the event, Dr Jamie Sergeant, Lecturer in Medical Statistics from the Arthritis Research UK Centre for Epidemiology in the Institute of Inflammation and Repair, said afterwards: “Thanks to everyone who supported the cake sale and football match on Tuesday. Those who came along were treated to a display of skill and creativity not often seen from amateurs. The football match went quite well too!”

“Most importantly,” he added, “we raised a fantastic £312.89 for Arthritis Research UK. Thanks to all those who took part in whatever way: baking cakes, eating cakes, playing football, refereeing, spectating or just digging deep into their pockets.”

To find out more about Arthritis Research UK, the research they fund at the University, or the realities of living with arthritis, visit ARUK