Researchers hope to trace 800 of the original 2,000 Manchester mothers who took part in the study 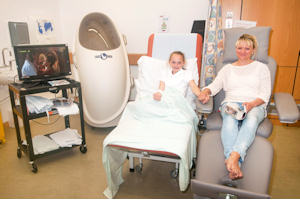 The study is a follow-up on approximately 28,000 women worldwide, who took part in research over ten years ago while they were pregnant. The aim of the study then was to help understand how blood sugar levels in pregnancy might impact on the unborn child in healthy mothers who did not have diabetes. The then pregnant mother had an Oral Glucose Tolerance test and the size of their babies was measured a day after birth.

Tracy said: “I decided to do the study when I was pregnant because we’ve got people in our family with diabetes and heart problems. This time we got a letter asking if we wanted to take part again and I gave Abigail the choice. She was a little nervous, but was made to feel at ease while we had a blood test and the researchers took our weight and height measurements.

“I think the research they are doing is important because your lifestyle has a lot to do with whether you develop diabetes and they can guide you if you need to make changes - fortunately our results showed we were staying healthy. I’d definitely recommend other mothers who did the original study to go along.”

Professor Peter Clayton, Professor of Child Health and Paediatric Endocrinology at the University and Paediatric Endocrinologist at the Royal Manchester Children’s Hospital, who is leading the study, said: “In the original study ten years ago we found that the higher the mother’s sugar level in pregnancy (but well below the level that we would diagnose as diabetes) the more likely her baby was to be bigger than expected. As a result, the mothers were more likely to need a caesarean for delivery. Also in those who delivered normally, there was a higher than expected rate of difficulties with delivery for both mother and baby.

“This study will help us to understand how blood sugar levels in pregnancy have affected the children as well as the mothers a decade later and maybe even give us some answers about how we could prevent our next generation from developing diabetes and the debilitating health problems that are associated with it.”

This time, mum and child born in the HAPO study are to be given another sugar test and measurements of body size will be repeated. The blood test will be assessing not only for sugar levels, but also how much insulin is being produced and how high blood fat levels are, all known to be associated with Type 2 diabetes.

Professor Clayton added: “Reports out recently are suggesting that rates of pre-diabetes may be as high as 35% in the UK. If we are able to pick up early diabetes, changes in diet and lifestyle would certainly help to slow down and may be even prevent future cases.”

The researchers hope to trace 800 of the original 2,000 mothers from Manchester who took part in the study.