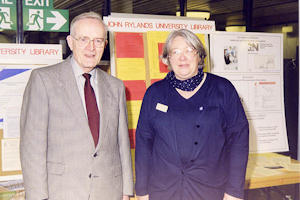 Two University academics have been named in the Queen’s Birthday Honours List.

Dr Timothy Peakman has been awarded an OBE for his services to Medical Research.

Dr Peakman is Honorary Senior Research Fellow in the Centre for Integrated Genomic Medical Research (CIGMR), part of the Centre of Epidemiology in the Faculty’s Institute of Population Health, and Executive Director of the UK Biobank.

Dr Peakman is responsible for the day-to-day running of the UK Biobank, a major national health resource, hosted by the University and supported by the NHS, which aims to improve the prevention, diagnosis and treatment of a wide range of serious and life-threatening illnesses.

Dr Diana Mary Leitch - pictured with Tom Kilburn - has been awarded an MBE for her Services to chemistry.

Dr Leitch is former Deputy Director of the University of Manchester Library and a trustee at the Catalyst Science Discovery Centre, the only discovery centre in the UK that specialises in chemistry.

Here Dr Leitch was the first woman to work at the library post-maternity, after a petition to the Vice Chancellor when it refused her return (perfectly legal back then). She was also Manchester’s first female University Presenter – introducing honorary graduands at graduation ceremonies – and the first academic librarian to become a Fellow of the Royal Society of Chemists. She retired from the University in July 2008.