Father, surgeon and supporters raise money for bursary in honour of Emma 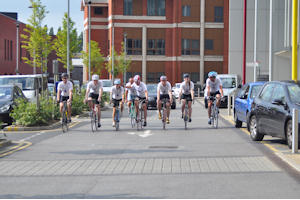 Cancer scientists, family and friends of Manchester graduate Emma Gyles have cycled 240 miles - calling at six North West hospitals along the way - to raise money for ovarian cancer research at the University.

Emma was just 24 when she lost her battle with cancer in 2008, shortly after graduating in criminology.

The annual cycle trip, organised by Emma’s father Ken, aims to raise awareness about ovarian cancer symptoms at each hospital stop along the way and sponsor money will fund a bursary for a Manchester Medical School student to spend one year learning about ovarian cancer research during their studies, under the supervision of Professor Richard Edmondson, who had treated Emma.

Ken said: “Emma would be smiling down on us. The bursary helps us to know that Emma’s still doing some good and that we are making a little difference in the battle against cancer.”

Professor Edmondson, who is part of Manchester Cancer Research Centre, said: “The symptoms of ovarian cancer can be vague but for instance if you notice any bloatedness which lasts more than three weeks you should get it checked out by your GP.”