The British Society for the History of Science (BSHS) has set up a new prize to honour a world-renowned University of Manchester historian. 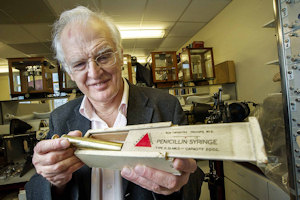 The BSHS John Pickstone Prize announcement coincides with a memorial meeting being held at The University of Manchester this Friday, to remember and celebrate Professor Pickstone’s contribution to the history of science, technology and medicine, and the history of the North West.

Professor John Pickstone, who died earlier this year, carried out research and teaching which exemplified the Society’s mission to promote excellence in the academic field of history of science, technology and medicine.

He was one of the nation’s most important historians of science, technology and medicine, and a tireless champion of Manchester's heritage.

Founding Director of the Centre of History of Science, Technology and Medicine (CHSTM) at The University of Manchester, he also founded the Manchester Histories Festival, which has grown to become one of the UK’s most successful annual events of its kind.

Born in 1944 and raised in Burnley, Lancashire, his education took him to Cambridge, London, Ontario and Minnesota.

In 1985, he moved to the then Victoria University of Manchester and established CHSTM, which he directed until 2002 when he became a Research Professor.

His most recent work was on the history of modern medicine and medical technology, especially the recent history of the NHS. He also had a long-standing interest in the regional history of science and medicine.

He established the Manchester Histories Festival in 2009, which was a huge success and has become a regular celebration of Manchester’s heritage.

Current Director of CHSTM, Professor Michael Worboys, said: “The Festival is a fitting tribute and memorial to John who was a great champion of the heritage of the University, the City and the North West, working tirelessly to inform the public and the academic world that we can learn from what has happened in the past.”

The prize will be awarded every two years to the best scholarly book in the history of science (broadly construed) in English, alternating with the Dingle Prize for the best popular book.

The winning book should mark a major advance in the understanding and interpretation of the scientific past. There are no restrictions on the form of the book; specialist monographs and synthetic works, whether singly or multi-authored, are welcome. Edited volumes, however, are excluded.

A shortlist for the first Pickstone Prize will be released at the Society’s EGM at its annual meeting in St Andrews in early July 2014. The winner will be announced in early December 2014.