The Royal Institution’s famous Christmas Lectures are set to wow Manchester audiences when they arrive in the city tomorrow. 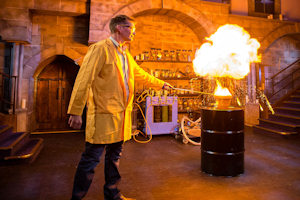 The ‘Modern Alchemist’ Christmas Lectures will be presented by Peter Wothers and promise a spectacular display of fiery explosions and amazing chemical reactions at two events tomorrow (Tuesday, 17 June).

The show follows the popular 2012 Christmas Lectures series held by the Royal Institution,  which was presented by Dr Wothers, a teaching Fellow with the Department of Chemistry at the University of Cambridge. 'The Modern Alchemist' series, shown on BBC Four, proved so successful that the Ri and Dr Wothers teamed up with the Royal Society of Chemistry to put on a touring lecture show.

Like the Christmas Lectures, the live show echoes the explosive stunts and sense of spectacle created by medieval alchemists for their royal masters. But unlike the showmen of the Middle Ages – who never gave away the secrets behind their spectacular stage tricks – Dr Wothers always uses the impressive feats as a way of explaining the scientific principles at work.

He said: “The 'Modern Alchemist' tour is an opportunity to build on the work I did with the Royal Society of Chemistry during the development of the 2012 Christmas Lectures.

“I think it’s hugely important to make chemistry accessible to new audiences, which is also one of the fundamental principles of the Royal Society of Chemistry’s Royal Charter and the Ri’s mission of encouraging people to think more deeply about the wonders of science.”

He added: “Perhaps most importantly, the tour is fantastic fun to take part in and is always met with enthusiasm from audiences of all ages and backgrounds.”

Olympia Brown, Science Learning Manager at the Ri said: "The Ri is always looking for new ways to engage more people, young and old, with the science behind the Christmas Lectures.

"Today we're over the moon to announce that for the first time ever, families and students across the country will be able to watch 'The Modern Alchemist' live in their home town."

The tour, which has dates in Leicester, the Scottish Highlands, Pontypridd, Harrogate, Plymouth and Norwich, rolls into Manchester, home of the atomic theory of matter, and the place where the atomic nucleus was discovered,  on June 17th.  There will be shows run for groups of school students in the afternoon and for members of the public and family audiences in the evening (6-7pm). Tickets for the evening show (and details of timing and venue) are available via the following link: