The father of a graduate who died from ovarian cancer has teamed up with The University of Manchester medic who treated her for a 200 mile sponsored cycle ride visiting seven hospitals in the North West. 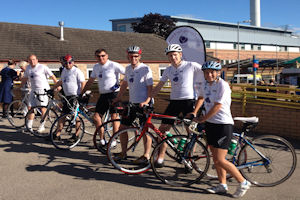 The trip will raise awareness of the disease with stands at hospitals along the way and raise funds for research to look for a cure for ovarian cancer.
Emma Gyles, originally from Aspatria, Cumbria, was just 24 when she lost her battle with cancer in 2008. Her parents Ken and Barbara were determined to keep her memory alive and support the fight against cancer – but wanted to stay connected to the research being done and so set up an annual bursary in Emma’s name. The bursary funds one medical student to spend one year learning about ovarian cancer research during their studies under the supervision of Professor Richard Edmondson’s team. Now in its fourth year the bursary will fund a University of Manchester student in 2014-2015.
Mr Gyles, of Carlisle, said: “Emma was a really positive person. She always wanted to help other people; she’d stop to chat to people sleeping rough on the streets of Manchester and once cooked a young man living rough on the streets a meal and washed his clothes.
“Emma 'went for it' in everything she did. She gained a degree in Criminology and got a great job with the criminal justice department.
“Emma could make us laugh with just one word and always had something funny to say. We wanted to follow her example and do her proud and I think seeing what we are doing now she’d be smiling down on us now and thinking 'well done the family and friends!'
“After Emma died we wanted to make sure she wasn’t forgotten and hearing about the research that the bursary is paying for – helps us to know that Emma’s still doing some good and that we are making a little difference in the battle against cancer.
“The bursary allows medical students to study ovarian cancer and supports young students starting out in their career.”
Professor Edmondson, from The University of Manchester - part of Manchester Cancer Research Centre, operated on Emma before she went on to have chemotherapy. He said: “Taking part in the bike ride is something I really enjoy doing because it raises awareness of ovarian cancer and raises funds to help inspire young medics to look for treatments for this disease.
“We want to let people know the potential symptoms to look out for and to be clear on cancer. The symptoms of ovarian cancer can be vague but for instance if you notice any bloatedness which lasts more than three weeks you should get it checked out by your GP.”
The father and surgeon cyclists will be accompanied by people who knew Emma or have worked on research into ovarian cancer with Professor Edmondson at the Universities of Manchester or at Newcastle University where he worked before moving to Manchester this year.
They include: Alice Schofield, University of Manchester scientist; Newcastle University medic Maddie Moat, who held the bursary last year; Kevin Rowan, works for the TUC, Richard O’Sullivan, Newcastle University, and Emily Barnard bursary holder.
Also accompanying the cycle team via car and blogging and Tweeting about the cyclists’ progress from the Twitter handle @EmmaGylesFund is Laura Gordon who lived with Emma when she was a Criminology and Contemporary Culture student in Manchester. By chance Laura now works with Professor Edmondson at The University of Manchester.
Laura said: “Emma was always really bubbly and made everyone smile in our student house. We’d kept in touch on Facebook and it was such a shock when she died. It’s great to be playing a small part to help keep Emma’s memory alive and support an important cause.”
It is the third cycle ride to support the Emma Gyles Bursary Fund.
For more information about ovarian cancer and how to recognise the symptoms see the NHS Be Clear of Cancer (http://www.nhs.uk/be-clear-on-cancer/ovarian-cancer/home).
To donate to the Emma Gyles bursary fund go to https://www.justgiving.com/kengyles.
ENDS