Two former members of staff, Rev Dr Richard Hills and Emeritus Professor Sir Netar Mallick, have been awarded the University Medal of Honour for their exceptional contributions to the University, Manchester and beyond 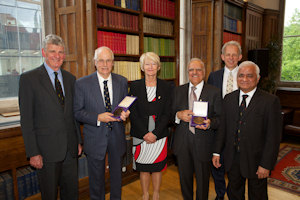 Rev Dr Hills is the founding curator of the Museum of Science and Industry or MOSI. For twenty years Richard worked tirelessly to record the industrial past of Manchester and the North West region. He assembled an outstanding collection of artefacts which included some of the most significant machinery that during the nineteenth century made Manchester the engine for economic and technological change.

Richard established UMIST’s museum to display the artefacts at its Oddfellows Hall site in Grosvenor Street.

The subsequent development of the collection into a major attraction and centre of learning at the city’s historic Liverpool Road site came about through his determination and drive. The museum has gone on to become one of the world’s great centres for the history of science and industry, building on the strong foundation work that Richard bequeathed.

Sir Netar Mallick is Emeritus Professor of Renal Medicine in Manchester. From 1967 Netar worked in the Department of Medicine in Manchester as Lecturer then Senior Lecturer in Medicine and was Associate Director of the Renal Transplantation Unit from its inception. From 1973, as Consultant Renal Physician, he developed an internationally recognised Department of Renal Medicine integrated with the Transplantation service. He has been President of the Renal Association of Great Britain and Ireland and Adviser to Her Majesty's Government on renal disease.  A Fellow of the Royal College of Physicians, he was also inaugural Fellow of the British Renal Society 2003 and first holder of a Lifetime Achievement Award for Asians 2003 (Jewel Awards). Until 2000 he was Medical Director of Central Manchester Trust.

Netar is a former Deputy Lieutenant and High Sheriff for Greater Manchester. He was knighted in 1998 for his service to renal medicine.

Richard and Netar were presented with their Medals by the Chairman of the Board of Governors, Mr Anil Ruia.