Professor Julian Thomas addresses ‘the Woodstock of the mind’ 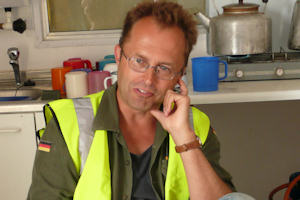 Professor of Archaeology Julian Thomas is speaking at the Hay Festival, the acclaimed writers’ gathering in the Brecon Beacons.

The festival – dubbed ‘the Woodstock of the mind’ by former US President Bill Clinton – has been held annually for 27 years, bringing together writers from around the world to debate and share stories in the staggering beauty of the Welsh Borders.

It celebrates great writing from poets and scientists, lyricists and comedians, novelists and environmentalists, and the power of great ideas to transform our way of thinking.

Over the last couple of summers, his archaeological team have uncovered two 6,000-year-old burial mounds and the remains of two huge halls that appear to have been ritually burned down. Professor Thomas, who leads the excavations, will talk about what they’ve found and the Neolithic traditions of houses for the living and houses for the dead.

Professor Thomas, who took up the Chair of Archaeology at Manchester in April 2000, is a Vice President of the Royal Anthropological Institute, a life member of the Collingwood Society and Fellow of the Society of Antiquaries of London.