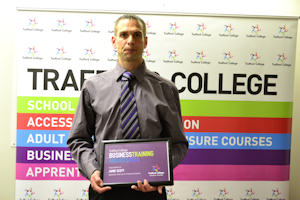 A University chef who turned his life around after a serious car accident has won Trafford College Apprentice of the Year.

Jamie Scott joined the University through The Works programme, a University initiative, which helps jobseekers in areas neighbouring the university improve their skills and, crucially, employment opportunities.

Jamie had been struggling to find work after a serious car accident left him unable to continue his career as a scaffolder.

He was one of 11 people who joined University catering through the programme in November 2012. During his placement he made a real impression and was offered a position as a Chef in Eats Restaurant, University Place in January 2013.

Jamie showed great potential and was encouraged to do an apprenticeship. He started a NVQ Level two diploma in Catering with Trafford College in May 2013. Jamie is now coming to the end of his apprenticeship, at which he has excelled and as a result has been awarded Apprentice of the Year by Trafford College. He received the award at the annual Trafford College Business Training Awards event on Thursday, 15 May at the Aspire restaurant at the College's Altrincham site.

Jamie said: “I have really enjoyed completing my apprenticeship and have learnt a great deal. It was an honour to receive this award and great to attend the awards ceremony and celebrate my achievements with some of those who have mentored me. I am now looking forward to using the skills I have gained along the way.”