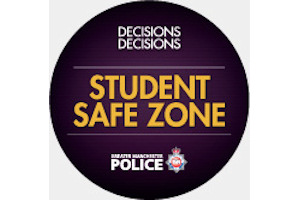 The operation was led by Inspector Phil Spurgeon and involved Cooper and Poppy observing licensing officers in action working with pubs and clubs in key student areas in the City Centre.

The evening was certainly enlightening and it enabled MSH the opportunity to see for themselves how the city's night time economy is policed.

Cooper said, "Manchester Student Homes is interested in student activity from a safety perspective.  It was great that we could observe behaviour in areas sucha as Fifth Ave as the students were queuing to get in as well as after when they were leaving the venue.  We were particularly impressed by the security staff efforts to safely disperse the crowds and this will prove useful when we attend community meetings in the City Centre."

MSH sits on the Student Safety Tactical Action Partnership, a strategic group to look at student safety across Manchester and the MSH office in Fallowfield is also a Student Safe Zone.

You can find out more information about this initiative here: