Awards showcase how we make a difference 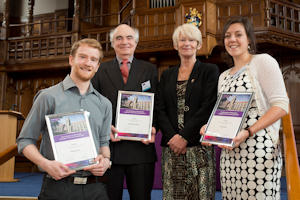 The University celebrated the volunteering achievements of its staff, students and alumni with the Volunteer of the Year and Social Responsibility Medal awards ceremony and lunch in Whitworth Hall.

The staff winner was Lucy Swinton, who is a Student Support Graduate Intern in the School of Nursing, Midwifery and Social Work. Lucy is a Director and the Oltenia Project Co-ordinator for The Life Foundation. In 2008 Lucy joined the organisation as a volunteer on projects in Romania and India and took on the role of Oltenia Project Coordinator in 2011 during her first year at The University of Manchester, becoming a Director of The Life Foundation during her final year.

In Romania, volunteers work with children and adults in governmental care, all of whom have intellectual or physical disabilities. Lucy recruits, interviews and trains volunteers for the programme and provides ongoing support. In her role as a Director, Lucy is involved in developing the organisation’s various projects, manages the recruitment and fundraising sub-committee, and organises fundraising events.

After receiving the award, Lucy said: “I am incredibly grateful to all my colleagues and friends and especially to The Life Foundation Committee who provide fantastic support. The donation for The Life Foundation will make a massive difference in Romania – it will contribute to providing medical equipment for a child with untreatable hydrocephalus, providing shoes for adults living in a government institution and to support the running of our centre in Oltenia.”

Thomas Pacey won in the highly competitive student category for his work with Chernobyl Children's Cancer Care Cardiff. This small charity provides funding and volunteers to assist with the running of a summer camp for disabled and terminally ill children in Belarus. An enthusiastic and dedicated volunteer, he’s spent time on the camp every year, also organising fundraising events to financially support these activities.

His dedication has seen Thomas appointed a Trustee by the charity’s Board, taking on more responsibility for financial and governance decisions. He has also devised a volunteer training programme so that they are fully prepared for camp life and develop their skills.

Alumni category winner was Dr Carl Clowes, whose voluntary activity since becoming a general practitioner on the Llŷn peninsula in rural North Wales was recognised. In the early 1970s, the health of the local population was affected by rural decline. Carl’s initial response was to set up and chair a Villagers’ Association to re-establish the village’s viability.

As challenges increased, Carl recognised the need for a more structured approach and in 1974 Antur Aelhaearn was born as an Industrial and Provident Society.   This was the UK’s first community co-operative, with each villager entitled to vote on local regeneration.

Carl’s commitment to the Llŷn peninsula has continued over the years, and the latest initiative in which he’s involved is Ynni Aelhaearn - the co-operative’s efforts to promote green energy through the development of a community turbine. Nominator Emrys Williams described him as a “special character” and other colleagues call him an “outstanding Welshman of his generation”.

Giving the keynote address, President and Vice-Chancellor Prof Dame Nancy Rothwell said: “Each year, I’m ever more inspired by the acts of generosity and time freely given by our staff, students and alumni to communities here in the UK and around the world.”