Manchester’s heroic C Crew is Security Team of the Year 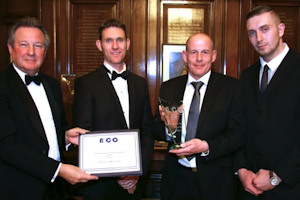 In November 2013, C Crew (David Collinson, Christian Rainford, Christopher Warden and Barry Needham) were called to an incident on campus in which a male with his face covered had walked up to a male student and produced what appeared to be a handgun.

A violent struggle followed, in which the security officers intervened with little regard for their own safety, detaining the suspect until police arrived. During a search, a gas powered BB gun fell from the suspect’s clothing, which was indistinguishable from a real firearm.

The award citation concluded: “The actions of the security team were truly outstanding and they displayed exceptional bravery in the circumstances. This shows extraordinary service to the University, which is over and above what would be expected as part of the security officer’s job.”

University Security Manager, Gary Rowe, said: “I would like to commend the security staff who detained this man who had just attacked a student nearby. Without any regard for their own safety and believing he had a gun, they still approached and held onto him until the police arrived. The actions of these security officers were truly outstanding and they displayed exceptional bravery in the circumstances.

“Fortunately, violent crime is rare on campus, but by taking sensible precautions, students and staff can reduce the risk still further.”

You can find further advice about keeping safe at: