Eight examples from a remarkable ‘visual encyclopaedia’ of Renaissance prints, lying undiscovered in the archives of The University of Manchester’s John Rylands Library for 108 years, have gone on show. 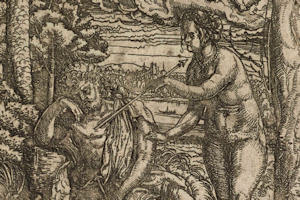 The 2,500 items – including original works by the renowned 16th century artist Dürer – were discovered in the basement of the Library by the Ryland’s’ Stella Halkyard and brought to the attention of art historian Dr Edward Wouk, who was researching material for a seminar on renaissance print cultures.

A note in the Library’s archives revealed to them that the collection had been bought in 1906 for £742 15s in auction by Enriqueta Rylands, the Library’s founder.

The prints - including woodcuts, etchings and engravings - had been mounted on cards and assembled over 50 years by Hiero Erasme Auguste von Holtorp, a Pole who emigrated to England, working in London as an artist’s draughtsman.

Inspired by the discovery, Dr Wouk and his students, as well as Stella Halkyard, have created the exhibition focussing on eight prints which illustrate the rise of printmaking in Europe.

One highlight of the exhibition is a 16th century print taken from an etching known to have been produced by another renowned artist, Hans Burgkmair the Elder. It is the only known example of Burgkmair using the medium of etching.

One of only a handful of surviving prints to be made of the etching, Venus, Mercury and Cupid is the only example currently on public display in the world.

Another, by Dürer and called The desperate man has no subject but shows a lamp, and contorted figures.

The print, according to the Dr Wouk, seems to have been created to advertise Dürer’s skills and wild imagination to potential buyers.

Dr Wouk said: “Some people underestimate the importance of printed culture. But, as our exhibition suggests, prints helped to construct artistic identity in the early modern period.

“In fact Holtorp, a bibliophile, conceived his collection as a visual history of printmaking

“What’s remarkable is that he organised it into folders and boxes, not albums, creating a very personal experience for viewers, who can riffle through them as a sort of visual encyclopaedia.

“When I first saw the collection my jaw dropped-  it was just incredible. I then thought how brilliant it would be to incorporate it into my teaching programme.

“But it’s the contributions of my students who have made this exhibition so exciting.”

One of the students, Naomi Chu wrote about the Burgkmair piece for the catalogue which is available for free at the exhibition.

She said: “Burgkmair using etchings to decorate armour worn by soldiers in Augsburg Germany, where he lived.

“It’s very likely that this print was an attempt by the artist to check the pattern, before it was used on a suit of armour.”

“The print depicts a restless Venus attempting to rouse Mercury by prodding his chest with the end of an arrow while her flustered son cupid hovers overhead, wielding an empty bow.

“The butt end of the arrow resonates with Burgkmair’s own use of a blunt stylus to mark the surface of the etching plate."