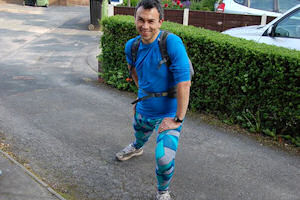 Alex, who is Engagement Manager for Policy@Manchester, based in the Faculty of Humanities, is taking part in the Bullock Smithy Hike on 6-7 September, which involves walking 56 miles around the Peak District in 24 hours, starting and finishing in Hazel Grove, Stockport.

He is raising money in memory of his dad, Richard, who died suddenly in January after being unexpectedly diagnosed with cancer just 10 days earlier. Alex is fundraising for Macmillan Cancer Support and Strathcarron Hospice near Stirling, which both provided support to him and his family.

Alex is aiming to raise £3,000 and challenged his supporters to help him raise £1,000 by mid-March – and promised to wear a pair of garish men’s leggings - known as meggings - during one of his training runs, if the target was hit.

The gauntlet was taken up by his colleague and friend Jenny Wragge (who works in the Directorate for the Student Experience), who eagerly spread the word. Thanks to her efforts and people’s generosity the target was reached, and so Alex fulfilled his side of the bargain on Monday morning (19 May) as part of his regular five mile commuting run to Stockport station from his home in Marple.

Alex said: “I have had some amazing support from friends, colleagues and family, but I have my sights set on raising a big sum for my chosen charities. I wanted to give people a gentle nudge to sponsor me and this seemed like a good idea. I had a great response and boosted my total by several hundred pounds once the challenge had been set – thanks mainly to Jenny’s efforts.

“My meggings certainly raised a few eyebrows and drew some strange looks, particularly with bleary-eyed commuters at Stockport station. When I first put them on my eldest daughter laughed and then said ‘hippopotamus’, which says something about my legs. But it brightened up my Monday, and people have said it made them smile – although some might still be a little traumatised!”

Alex will be doing the Bullock Smithy Hike as part of a small team, which includes Pete Morris from the Student Communications and Marketing Team. You can sponsor Alex for his 56-mile challenge by going to: