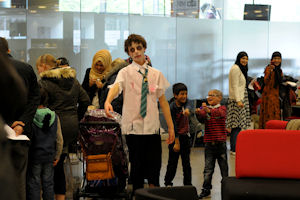 The idea behind the event was for the Manchester Pharmacy School, in conjunction with Gilead Sciences, to demonstrate the various stages involved in making medicines through a range of fun and informative activities. Set against a public health theme, visitors were invited to journey through the different stages of the drug development process to find a cure for a new and highly infectious (and of course fictitious!) microorganism that turns human beings into zombies if infected.

Six distinct stages of the drug development process were identified, each of which had at least three different hands-on activities associated with it. The activities were specifically designed to attract all age groups, from primary school pupils to high school pupils and even parents and carers, and included the opportunity of visualising microorganisms, extracting some DNA, molecular modelling, measuring tablet dissolution, testing a new ‘antibiotic’, taking part in a clinical trial and producing some creative packaging for the new medicine.

Adding to the fun was Professor Penelope Peewee who ran an extremely interactive role play activity for 7-12 year olds. Their task was to hunt and destroy zombies that were in the building, brilliantly played by pupils from Chorlton High School.

A significant feature of this Open Day which set it apart from other similar University events was engagement with the local community. Contributions of art work and theatre, for example, from local and the neighbouring communities and schools helped to make this an event by the community, for the community.

Feedback from visitors who completed a feedback questionnaire was overwhelmingly positive, stating that the event was “fun”, “interesting”, “educational” and “inspiring”. Many even asked if we would be repeating the event. When asked what he thought about that idea, David Allison, who organised the event, simply stated: ”watch this space!”