With a birthday fast approaching (one of those with a zero on the end), Fiona Lynch, Student Recruitment and Widening Participation Co-ordinator, decided that issuing herself four running challenges would ultimately be cheaper than buying herself an inappropriate sports car! 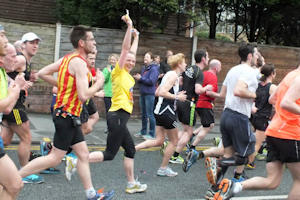 So far she has conquered two of the challenges, completing the Liverpool half marathon in one hour and 40 minutes and the Manchester Marathon in a respectable three hours, 37 minutes. But it’s not all about celebrating her birthday. Fiona is using her re-introduction to running in order to raise money for Féileacáin – the Stillbirth and Neonatal Death Association of Ireland, a charity close to her and her family’s hearts after the stillbirth of her nephew, Jasper, in July of last year.

Féileacáin supported Fiona’s sister, brother-in-law and family at a time of unimaginable grief by providing not just ongoing counselling but with a memory box which contained precious items such as a lock of Jasper’s hair, his hand and footprints, a camera full of photographs and two teddy bears – one for the family and one for Jasper to take with him.

Féileacáin is a newly formed, not for profit organization that aims to offer support to anyone affected by the death of a baby during pregnancy or shortly after. The organisation was formed by a group of bereaved parents who supported each other after the death of their own babies and have now come together to formally offer support to other parents and families who find themselves in a similar situation.

You can find out more about Féileacáin and the work it does here:

Fiona’s original aim was to raise €700 but with just two races under her belt she has already smashed that ambition and her total is now nearly €2,000. Fiona said, “I can’t believe how supportive people have been. It makes the early morning training all the more worthwhile! Féileacáin and its aims are so important to me and my family.”

Her next challenge is the never been held before Liverpool Rock n Roll Marathon on 25 May followed a week later by the mere 14 mile Karrimore Great Trail Challence in Keswick.

If you would like to support Fiona in her next two running challenges, please visit her fundraising page at: