The University is to host Former Greek Prime Minister, Costas Simitis, who will deliver a special lecture on the future of the Eurozone on 14 May. 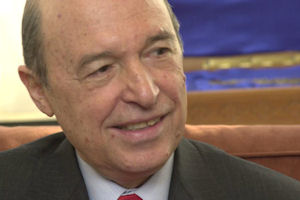 The politician, is launching his new book called European Debt Crisis: The Greek Case published by University of Manchester Press.

He is the third former prime minister in four months to be hosted by the University’s Jean Monnet Centre of Excellence, following on from lectures by  Belgium’s Guy Verhofstadt and Greece’s George Papandreou.

Simitis, who was Premier when Greece entered the Eurozone, was leader of the Panhellenic Socialist Movement (PASOK) from 1996 to 2004.

He is largely known in Greece for his political philosophy known as modernization, which focuses on extensive public investment and infrastructure works as well as economic and labour reforms.

The author of numerous books and articles, he is credited by his supporters with overcoming chronic problems of the Greek economy and achieving the admittance of Greece into the Eurozone.