This is a blog by James Baker, Business Director for Graphene@Manchester. As the government announces further support for the UK’s emerging graphene industry, James Baker from the National Graphene Institute says the emerging concept of a ‘graphene city’ can be a UK model for commercialising new scientific discoveries. 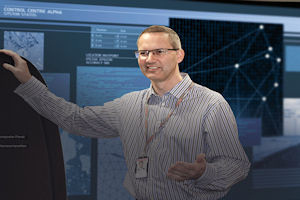 Announcing new investments into graphene commercialisation in March’s Budget, Chancellor George Osborne described the material as a “great British discovery that we should break the habit of a lifetime with and commercially develop in Britain”.

As the new business director for the National Graphene Institute (NGI), which has its new £61m building opening here at the University next year, I obviously couldn’t agree more.

I first came across graphene in my previous job at defence giant BAE Systems where I was in charge of technology collaboration programmes. We ran a number of ‘futures’ workshops where the aim was to get senior executives to think about how the wider world might look in 20 years time.

In defence there has been much debate about the need for a coherent defence industrial strategy to ensure we have the necessary skills and industrial capabilities for the future, and it was through these sessions that a wider dialogue around technologies such as graphene as a potential ‘disruptive’ capability started to emerge.

Whether it’s helping develop new lightweight components for aircraft or battery packs for soldiers, or developing flexible touch screens for the specialist gadget market, graphene has a vast array of potential uses.

My role is to sign up potential industrial partners who want to collaborate with The University of Manchester and take the graphene science to a higher maturity and onto commercialisation. We are looking for partners across a range of sectors who want to operate in this environment in an open, shared and collaborative way.

Which brings me to my excitement about the potential of creating jobs not just here in the North West but across the wider UK. If we get this right we have the potential to create a lot of jobs and make the UK more competitive, create a true graphene cluster so that overseas investors want to be here.

Here in Manchester the NGI is all about creating the right environment, an environment where academics and industrialists can rub shoulders and accelerate speed to market – to turn ‘discovered in Britain’ into ‘made in Britain’.

The vision of creating a ‘graphene city’ in the 21st century can be compared with Manchester in the 19th century when economic activity and innovation developed largely in the absence of the state.

However, today the co-operation between private, public and third sectors actors is more critical to create the ecosystem necessary to increase the opportunities for commercialisation that graphene potentially offers.

Recent Budget announcements regarding funding for graphene commercialisation as well as support for building the NGI and future developments are welcome, but we need to keep focused and look to increase the pace.

A coherent industrial policy can support commercialisation and is necessary, but it is not sufficient. It will be through the creation of the right partnerships and collaborations that we will make this into reality.

By getting this right, this model of creating ‘clusters’ of the key knowledge base, together with relevant industrial capabilities through appropriate partnerships and collaborations, can be a model for commercialisation over the next 20 years.

There is lots of talk regarding the registering of graphene patents – the UK is admittedly lagging behind some countries at present and needs to raise its game. However this is only one metric against which the development of graphene can be measured.

I believe Manchester is extremely well focused and positioned to stay number one in terms of leveraging the knowledge base and developing the value chain around this, and building a critical mass through to commercialisation.

As important is the creation of an ecosystem and the creation of pace and accelerating the numerous opportunities with the right partners and collaborations which can increase the probabilities of success for new applications and products.

Some people wrongly perceive that the commercialisation of graphene is many years away. One of the big challenges I have is to relay to companies that while some applications may indeed be some way off, there are also some quick wins that can be gained where the addition of graphene properties can significantly enhance a particular product or capability right now.

Graphene has the potential to be combined with other materials which make the product even stronger and yet even more flexible. The example you hear lots about is the ‘graphene’ Head tennis racket used by Andy Murray and many others.

The fact is that it appears to be a graphite racket which has been enhanced by adding graphene flakes, making for a lighter and more impact resistant product. An example such as this proves that graphene can be far more than just hype. Graphene is starting to tell a story.

The key now is to bring to life the business potential of graphene, help to make the business investment case for companies to put their money into graphene – and Manchester. Graphene needs to start being brought to life. It is still very much technology push, we need more pull.

What is also essential is that we begin to find the specific applications for graphene that will make a real difference compared to existing or alternative materials, providing focus on those applications that really make the difference.

Until now Manchester has kept a broad outlook on graphene which has made sense and it has built a strong knowledge base. But it is time to focus on specific potential uses.

At the same time Manchester has to accept that not every potential use of the material will be researched here. While it will want to remain a key hub it will also need to reach out to other establishments such as Cambridge University or the High Value Manufacturing Catapult, part of the Technology Strategy Board’s response to the commercialisation of technology.

James Baker joined Graphene@Manchester from BAE Systems. He is responsible for attracting commercial organisations to work with The University of Manchester's scientists on future graphene applications. The blog first appeared on the Policy@Manchester website.