Over 250 people from Manchester celebrated the launch of Science Stroke Art 2014 on Thursday, 1 May, with an innovative event at Manchester Town Hall to mark the start of Action on Stroke Month. 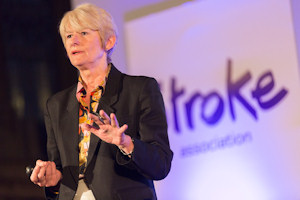 Dr. Chris Steele, GP and This Morning’s resident doctor, hosted the evening which was organised by the Stroke Association in partnership with The University of Manchester. The night mixed music, poetry and visual art with short talks about stroke research and the latest in stroke treatment from a panel of speakers.

Professor Dame Nancy Rothwell, President and Vice-Chancellor of The University of Manchester and a world-renowned expert on stroke, discussed the work of scientists at the University, while Professor Tony Rudd CBE, National Clinical Director for Stroke, NHS England, debated the changing face of stroke medicine.

Poet Mike Garry performed and discussed his personal experience of stroke, after his father had a stroke when Mike was just five years old. Stroke survivors Mark Ware MFA, Pieter Egriega and Andy McCann also shared their own inspirational stories of life after stroke.

The event kicked off Science Stroke Art 2014, a series of engaging events in the city during in May. The programme includes interactive talks, music, theatre and live demonstrations, each designed to capture the public’s imagination and challenge misconceptions about the condition.

Cultural organisations including Contact, Manchester Museum, Museum of Science & Industry and The John Rylands Library will host interactive events to raise awareness of stroke. The public can visit events including a human library and story-telling session with stroke survivors at The John Rylands Library, a performance at the Contact Theatre by stroke survivor Peggy Shaw, and a pop up workshop at the Museum of Science & Industry, to help demonstrate the impact of stroke on the brain.

Professor Dame Nancy Rothwell said: “What we want Science Stroke Art to do is raise awareness of stroke and show that it is not just something that happens to old people, but that young people can be affected too. We also wanted to show that stroke isn’t the end of a fulfilling life and to tell people about research into stroke.

“I never like to make false promises but there’s a possibility that in the next few years that there will be radical new treatments for stroke.”

Chris Larkin, Regional Head of Operations from the Stroke Association said: “Stroke is one of the greatest health challenges of our time but doesn’t get the attention or funding it deserves. Far too many people don’t understand it or think it’ll ever happen to them. Science Stroke Art 2014 aims to help overcome this challenge by raising awareness of stroke through an engaging programme of events, all taking place throughout Action on Stroke Month.”

About all Science Stroke Art events:

During Action on Stroke Month, the Stroke Association will be raising awareness of TIA (or transient ischaemic attack, also known as a mini-stroke). A TIA is the same as a stroke, except that the symptoms last for a short amount of time and no longer than 24 hours. Just like a stroke, a TIA is a medical emergency. The Stroke’s Association’s Not just a funny turn campaign and report marks the start of Action on Stroke Month 2014, which is supported by Legal & General.

To find out more, please visit: