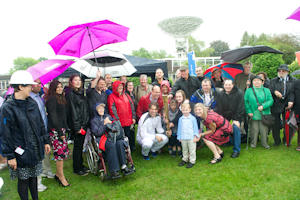 A Jodrell Bank colleague is running the Manchester 10k to raise money for charity Brainstrust in memory of one of the Discovery Centre’s members, seven-year-old Lucas Garrity.

Amanda Labella met Lucas and his family through her job as PA to Dr Teresa Anderson, Director of the Jodrell Bank Discovery Centre.

Lucas's family are members of Jodrell Bank's annual membership scheme and Amanda met them at several of its events, the last time when the Olympic torch relay visited the University site and scaled the iconic Lovell Telescope.

Lucas was among the host of schoolchildren who greeted the torch – carried by comedian and charity fundraiser John Bishop – along with President and Vice Chancellor Professor Nancy Rothwell.

Just a month later, Lucas became ill. His father Damyon contacted Amanda a few months later to let her know he had an aggressive and inoperable brain tumour. He died not long after his seventh birthday last year.

Amanda recalls: “I last saw Lucas as a happy, healthy six year old, running around with his brother Zac and my two children.

“He was a brave, cheerful little boy who never lost his big, beautiful smile despite his illness and I want to remember him, while supporting the charity that continues to work so hard to find a cure for the brain tumour that Lucas suffered with and supports families such as the Garritys.”

Amanda – who has been running for eight years and has fundraised for charity before, in memory of her father Alan, who died from cancer six years ago – is running the Manchester 10k with Damyon and a big group from Lucas's school. She would like to raise at least £150.

Brainstrust is a UK brain tumour charity, dedicated to helping people affected by a brain tumour. It seeks to improve clinical care for brain tumour sufferers and provide co-ordinated support in their search for treatment, providing support and advice from the point of diagnosis and beyond.