A University of Manchester Chemistry Professor has been elected a Fellow of the Royal Society, the UK’s national Academy of science announced today (Thursday). 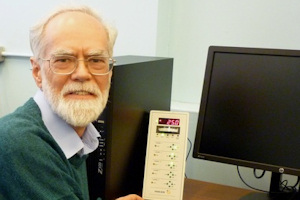 Gareth Morris, Professor of Physical Chemistry in the School of Chemistry, has been awarded the prestigious honour for his ground-breaking work in nuclear magnetic resonance (NMR) spectroscopy.

The Fellowship of the Royal Society is made up of the most eminent scientists, engineers and technologists from the UK and the Commonwealth. Past Fellows and Foreign Members have included Newton, Darwin and Einstein.

Educated at Magdalen College Oxford, Professor Morris joined The University of Manchester in 1982. He was awarded the RSC Corday-Morgan prize and medal in 1988, a Leverhulme Fellowship in 1996, and the RSC Industrially-Sponsored Award in Magnetic Resonance Spectroscopy in 2001. In 2011 he was also awarded the Russell Varian Prize for NMR.

He said: “Fellowship of the Royal Society is one of the highest honours in British science, and I am very grateful – and not a little surprised – to have been elected. Manchester has been a wonderful place to work for the last 32 years, and this honour would not have come about without the generous support and collaboration of colleagues in Chemistry and across the University.

“One of the joys of research is never quite knowing where things will lead – at different times our work has ended up being used in research on nanoscience, heart transplants, and quantum computing – but in a career full of surprises this has been one of the nicest.”

Professor Christopher Whitehead, Head of the School of Chemistry, said: “I am delighted that Gareth has been elected a Fellow of the Royal Society. This is a well-deserved honour for Gareth and recognises his wide-ranging achievements in the field of NMR. The School is very proud of this distinction.”

Sir Paul Nurse, President of the Royal Society, added: “Science helps us to better understand ourselves and the natural world on which we depend. Building scientific knowledge helps us face some of the planet’s biggest challenges such as food shortages, climate change and tackling disease.

“These scientists, who have been elected to the Fellowship of the Royal Society, have already contributed much to the scientific endeavour, whether that is in academia, industry or government.”