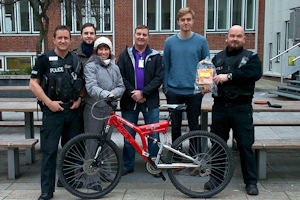 The University has a number of successful initiatives to reduce cycle crime but the reality is bikes are still stolen (99% have poor quality locks).  In an effort to help students or staff who have a bike stolen on campus, the University is introducing a free bike loan scheme so that victims will have access to a bike on a short term loan basis while they look to replace the stolen one.

The bikes have either been recovered on campus by car parks staff or by the police.  They've been serviced by volunteers at the Students Union Biko Bikes Project or by a community payback scheme run by the police.

Ian Halliwell, the University's Crime Reduction Advisor said, "We already offer cycle security measures such as the free cycle registraiton scheme and the discounted Gold standard locks but, having spoken to victims of bike crime, we wanted to go that one step further."

Andrew Hough, the University Sustainable Travel Planner said, "I am pleased to support this excellent addition to our package of cycling initiatives.  Whilst Ian in particular does a fantastic job reducing the chances of bike theft, to have this safety net for the victims goes some way to reduce the burden and keep them on two wheels."

A number of departments from with the University, volunteers from the Students Union and the police have all be involved in making the project happen.