Freedom of the city for Nobel Laureates

Sir Andre Geim and Sir Kostya Novoselov have been awarded the Freedom of the City of Manchester. 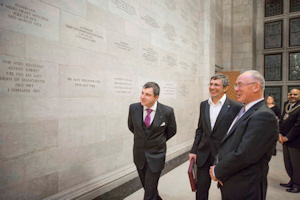 The freedom of the city is the highest honour Manchester can bestow. The honour recognises the pioneering work undertaken by Sir Andre and Sir Kostya, who won the Nobel prize in 2010 for their work on graphene.

In their resolution, the council also recognised the importance of the University to the growth and regeneration of the city.

Sir Andre said: “It is a great honour to be awarded the Freedom of the City of Manchester. Manchester has been my home now for almost 14 years and is very close to my heart."

Sir Kostya said: “I’m thrilled to have been awarded the Freedom of the City. Manchester was home for the largest proportion of my most exciting experiments, and the local support we get is tremendous.”

Cllr Hassan added: “It was a privilege to be able to present the freedom of the city to Sir Andre and Sir Kostya.

“The significance of their work on graphene is truly breath-taking and we are yet to truly grasp the magnitude of its real-life applications.

“Manchester is a city born of innovation so it is only right we recognise the achievements of Sir Andre and Sir Kostya – who have joined the pantheon of scientific giants connected to our forward-looking city.”