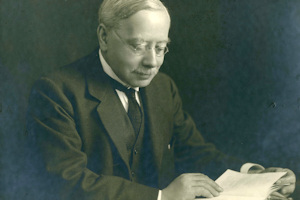 The free exhibition shows the letters to Professor Thomas Frederick Tout (1855-1929) displayed alongside six specially commissioned works by University of Salford visual arts students. They were written over the course of the conflict, whose centenary is being commemorated across the country this year.

But Herbert Eckersley, killed in action in 1917, was one of 300 Victoria University of Manchester students who lost their lives in the Great War, according to a 1918 speech by the then vice chancellor Sir Henry Miers.

Eckersley was killed near Ypres in November 1917, and the last letter he wrote to Professor Tout just 15 days before he died, shown in the exhibition, expresses the hope that he will soon be back in Manchester and working on his thesis.

A further 20 were missing, 20 taken prisoner, two repatriated, and one escaped from prison. Members of the University had been awarded 140 military distinctions in World War One.

She said: “Archive research is creative thinking, a creative act, and has proved a source of huge inspiration for our B.A. Visual Arts students. It has alternatively amused and moved them to tears, and has produced very rich and varied responses, ranging from printed books to sculpture to textile pieces, each a personal response to a letter or set of letters, creating a new highway to the past, a new way of telling the story, reinvesting forgotten people and histories and making it relevant for the 21st Century.”

One of the visual arts students - Angie Nicholls - is herself a former soldier who served in Iraq with the Territorial Army.

Also featured for the first time in public are three watercolour drawings, made at the front by serving soldier Walter Phythian depicting scenes from the front, including maps and artistic impressions. Phythian survived the war, after fighting in Ypres.

Another section of the exhibition – called Aftermath -  shows a poem by Katharine Tynan , an Irish Catholic whose writing was popular at the time, but now largely forgotten. Included in that display are letters to Katharine from bereaved members of the public and her most popular poem at the time “The Flower of Youth”.

And some photos taken at Grangethorpe hospital in Rusholme, Manchester, show a scene from inside a ward; another shows disabled soldiers taken part in a sporting event.

Co-curator, John Rylands Library Visitor Engagement Manager, Jacqui Fortnum added: “It’s remarkable how in the face of such appalling experiences during war, so many people have found a way to be compassionate and creative.

“Aftermath brings together examples of protest, reflection, memorial and invention. These represent the stories of people across the world, throughout history and from every walk of life, whose lives have been forever changed by conflict.”