The University is sorry to announce the death of Professor John Pickstone, aged 69, following a short illness. 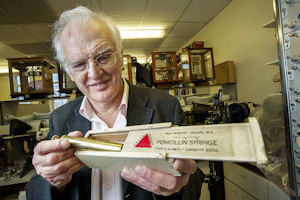 Professor Pickstone was one of the nation’s most important historians of science, technology and medicine, and tireless champion of Manchester's heritage.

He was the founding Director of the Centre of History of Science, Technology and Medicine (CHSTM) and was founder of the Manchester Histories Festival, the UK’s leading event of its kind.

Born and raised in Burnley, Lancashire, his education took him to Cambridge, London, Ontario and Minnesota.

In 1985, he moved to the Victoria University of Manchester and established CHSTM, which he directed until 2002 when he became a Research Professor.

His most recent work was on the history of modern medicine and medical technology, especially the recent history of the NHS. He also had a long-standing interest in the regional history of science and medicine.

He established the Manchester Histories Festival in 2009, which was a huge success and has become a regular celebration of Manchester’s heritage. This year’s event starts next month on 21 March.

Current Director of CHSTM, Professor Michael Worboys, said: “We are devastated that John, our good friend and colleague, and a world renowned historian of science, technology and medicine, has died.

“He was also a great champion of the heritage of the University, the City and the North West, working tirelessly to inform the public and the academic world that we can learn from what has happened in the past.

“Our thoughts are with his family and many friends.”