Science Minister David Willetts MP today visited the site of the National Graphene Institute (NGI) at The University of Manchester, which will be the UK's national centre for research into the wonder material. 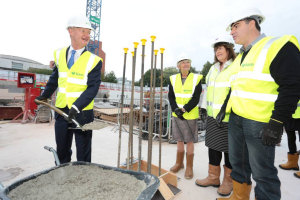 Work has begun on the £61m facility, which will provide a centre for industry and university academics to work side-by-side on emerging graphene applications.

Mr Willetts poured concrete into the foundations of the site, which is set to open in early 2015. The Government, through the Engineering and Physical Sciences Research Council, provided £38m for the NGI, the remaining £23m coming from the European Regional Development Fund.

He was escorted around the site by Sir Kostya Novoselov, who - along with Sir Andre Geim - first isolated graphene at The University of Manchester in 2004, earning them the Nobel prize for Physics in 2010.

Later that day, Mr Willetts spoke about graphene in his speech to the Conservative Party Conference in Manchester. He said: "Scientists here in Manchester used sticky tape to pull thin layers of material off a block of graphite until eventually they discovered graphene, one atom thick and 200 times stronger than steel.

"It is brilliant science with just a hint of Blue Peter. They got the Nobel prize for that in 2010 and two years ago in this very hall George backed them with £50 million. Now they are building a world-class lab – I was there this morning shovelling cement. I do a lot of that as Science Minister.

"The world’s researchers are beating a path to Manchester and I can announce today that Manchester will host Europe’s leading science conference – here in this hall – in 2016. We can be proud of having so many of the world’s great universities here in Britain."

The University, which has more than 100 scientists and engineers working on graphene and other 2D materials, has a number of exhibits on show in the Conservative Party conference's Innovation Zone, including graphene, but also SpiNNaker, a 'magic carpet' and spin-out company Nanoco.

In his conference speech, Mr Willetts also set out his goals for UK science. He said: "Our aim is for Britain to be the best place in the world to do science. That is the challenge Brian Cox has set and, Brian, we are up for that. But to achieve that we must invest long term and get the next generation doing science and engineering. That means girls as well as boys."

"We are, as David said, in a global scientific race, and we certainly have the foundations in place to win it, with world-class universities, like Manchester, and a tradition in science and engineering that is second to none.

"What we've lacked over the last few decades is sufficient ambition and vision to build on those foundations. It's very heartening to hear the government state that its aim is to make Britain the best place in the world to do science.

"To me, it's obvious that we should invest in the things we are good at, and especially those which will deliver significant economic gains. Science and engineering tick both these boxes, and that's why increased long-term investment at every level, from schools through universities in education and research, will benefit this country enormously."

The University's President and Vice Chancellor, Professor Dame Nancy Rothwell, herself a world-renowned neuroscientist, commented: "Extensive evidence shows the value of research, and science in particular, as a driver of economic growth and prosperity. We therefore welcome investment in education and infrastructure which is essential for our future success."

Following the visit to the NGI, Mr Willetts - accomapnied by Professor Rothwell and the Vice President and Dean of the Faculty of Engineering and Physical Sciences, Professor Colin Bailey, was given a tour of BP-ICAM, the University's centre for advanced materials.