It was triple delight for The University of Manchester at the 2013 SET (Science, Engineering and Technology) Student of the Year Awards announced in London last night (Thursday). 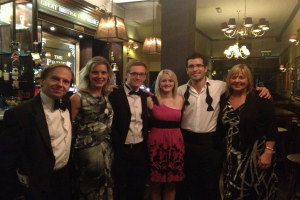 Record numbers of entries were received this year and judges paid tribute to the exceptional quality of the work, with 42 students shortlisted in 14 different categories.

Manchester’s trio of winners were Joseph Northwood, a Masters student last year in the School of Electrical and Electronic Engineering, who won the ARM award for the Best Electronic Engineering Student for the ARTEMIS (Autonomous Robotic Technology Enabling Minimally Invasive Surgery) Project.

Laura Howarth-Kirke, a graduate of the School of Computer Science, won the award for the Best Computer Science Student for her project entitled, ‘Learning and Recognising Human Gestures using the Microsoft Kinect’. Laura was the highest scoring winner overall, so making it a truly memorable night for Manchester’s Faculty of Engineering and Physical Sciences, she also took the BP SET Student of the Year honour.

Laura's success meant that the award for the Lecturer of the Year went to Dr Gavin Brown in the School of Computer Science, who supervised her final year project.

Making use of the Microsoft Kinect device, Laura built a software interface capable of recognising human gestures for the purposes of controlling media devices like TVs – this is cutting edge technology, only just appearing in modern Samsung TVs this year.

However, the project went beyond what is available on the high street, using ‘machine learning’ techniques to automatically learn new personalised gestures from the user. No existing retail device has this capability, yet Laura managed to build it during a five-month final year project.

During the project, Laura learnt new programming languages and large software toolkits, as well as advanced techniques (MSc level) in Statistical Machine Learning called ‘Hidden Markov Models’, as well as advanced mathematical formalisms like quaternions, something that belongs on an MSc module in computer graphics.

Dr Brown said: "It was a privilege to work with Laura, and I enjoyed every minute of the project we worked on, seeing her bring the various technologies together. When she was awarded the Best Computer Science Student prize, I was extremely happy but when her name was called out as the overall SET Student of the Year, I was ecstatic, and even more so when I had to get up to receive my award. Laura is now creating the future of your TV technology, working at the BBC. Here at Manchester, we're all very proud of her."

Minimally Invasive Surgery, also known as keyhole surgery, has revolutionised medical practice by minimising both the size and number of surgical incisions. Whilst this surgical technique has significantly reduced patient trauma and recovery times, post-operative infection still remains a significant problem which and affects around 14% of patients at a cost of £930m in the UK alone.  The ARTEMIS project investigated the feasibility of developing swallowable autonomous robots capable of performing minimally invasive surgical procedures. The project explored the key technological challenges required to deliver such robotic systems, and demonstrated the feasibility of the approach using a 6:1 scaled surgical capsule and an actuated physical model of the  upper gastrointestinal tract.

Professor Colin Bailey, Dean and Vice President of the Faculty of Engineering and Physical Sciences, said: "This is excellent news and very well deserved. I want to congratulate all the Manchester winners and finalists – their success is testimony to the talent of our students and the quality of our teaching and learning."