The University of Manchester has signed a £100,000 cooperation agreement with Brazil’s leading scientific research funding agency to promote research links between the UK and the state of São Paulo. 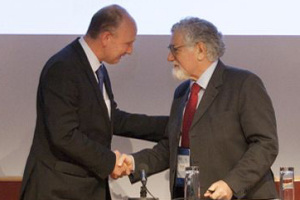 The five-year agreement with FAPESP (São Paulo Research Foundation) will make it easier for UK researchers to work alongside colleagues from Brazil’s top-ranked universities. Each party will contribute £50,000 to fund calls for proposals across a range of science disciplines.

The memorandum of understanding signed today (26 September) by FAPESP President Celso Lafer and Colin Bailey, Vice-President and Dean of Manchester’s Faculty of Engineering and Physical Sciences. The two are attending a conference at the Royal Society sponsored by FAPESP.

FAPESP already has similar cooperation agreements with 13 UK universities and all the UK Research Councils.

Professor Lafer said: “Researchers at Brazilian universities sponsored by FAPESP are already working very closely with experts from The University of Manchester to study the way Amazonia affects global climate change. We now look forward to fruitful cooperation on a much wider wide range of scientific disciplines.”

Professor Bailey said: “The University continues to enhance its partnership with organistations in Brazil and we are particularly pleased to sign this agreement with FAPESP, which will continue to support and grow our research links with the state of São Paulo

The fast-growing ties between the UK and Brazil were praised by Universities and Science Minister David Willetts who is this week scheduled to address the FAPESP Week conference in London.

“Brazil has a growing reputation for developing cutting edge research,” said the minister. “It’s essential that the UK works closely with colleagues from Brazil to maximise this potential.”