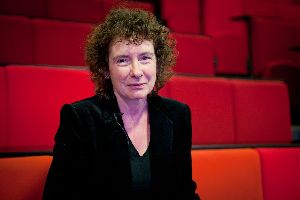 Lynne Truss is a writer and broadcaster best known for her globally bestselling book on punctuation, Eats, Shoots & Leaves (2003). She is a wide-ranging comic author, whose twelve books to date include three novels, a rant about rudeness in the modern world, and a memoir describing her life as an unlikely sports writer for The Times. Her greatest passion, however, is for drama, and she has written numerous series and one-off dramas for BBC radio. She also contributes short essays on sport to BBC Radio 4’s flagship morning news programme, Today.

Since 1990, she has been a freelance writer, with a close association with The Times, where she still writes annually about the Open Golf Championship.
Currently she writes monthly for Saga magazine, and weekly for the Sunday Telegraph. Her first stage play a short three-hander called Hell’s Bells premiered at the Edinburgh Festival Fringe in August 2012.