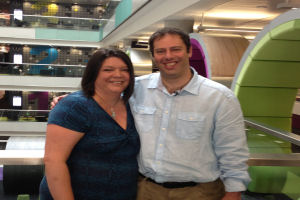 A University professor and his wife have had their own DNA analysed for compatibility as part of the research for a new book.

Professor Daniel Davis and his wife Katie’s experience is documented in The Compatibility Gene, published by Penguin, which discusses how our crucial compatibility genes may influence finding a life partner as well as our health and individuality.

The book explains how research has radically transformed knowledge of the way our bodies work. It includes an account of Swiss zoologist who had people rank the sexiness of smells from worn T-shirts - and found the results related to our compatibility genes. It also looks at how the genes may influence the likelihood of problems in pregnancy.

Professor Davis, Director of Research at the University of Manchester's Collaborative Centre for Inflammation Research (MCCIR), said finding out more about his and his wife’s genetic make-up had been a surprisingly nerve-wracking experience. The couple had their saliva sent to the Anthony Nolan Trust – a UK charity that helps match transplantation donors and recipients.

Professor Davis discovered his compatibility genes were quite rare, while his wife’s were more common.

He said: “After being pleased that my genes were quite rare - which according to those smelly T-shirt experiments would mean lots of women would like my scent - I then realised this might not be so useful if I ever needed a transplant. In fact the advice they gave me was: Just don’t get ill!”