The University has appointed the UK’s first University Historian and Heritage Officer. 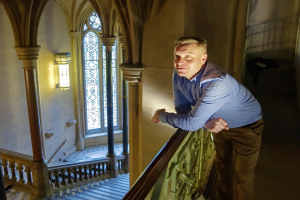 Dr James Hopkins takes up the position following his previous role as a researcher in history and becomes an Honorary Research Fellow in the School of Arts, Languages and Cultures.

James studied History and Politics at Nottingham and Newcastle universities before working in Communications. He completed his PhD on the history of academic institutions and their impact on policy.

James said: “I am delighted to be taking on such a significant role at the University – my role exists at some universities overseas, especially in the US, but as far as we know mine is the only such current full-time role in the UK.”

James’s full-time role builds on the University’s considerable progress on heritage work to date, and highlights the University’s long-standing reputation for ground-breaking research and scholarship.