Family fundraiser for their brave boy

The family of a boy diagnosed with type 1 diabetes at just 18 months old is raising money for a charity that funds research into the condition and also supports sufferers. 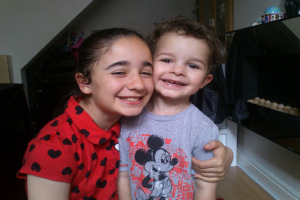 Martin Kloos, Finance Operations Supervisor at the Faculty of Humanities, and his daughter Natasha are taking part in the Walk for Diabetes to raise money for Juvenile Diabetes Research Foundation (JDRF), to thank the charity for its support for their “amazing, full of life” son and little brother Aaron.

It is rare for someone so young to develop diabetes – only around 1,000 people under the age of five in the UK are diagnosed with the condition. Aaron has type 1, which means he has high blood sugar because the pancreas does not produce enough insulin to turn it into energy.

Aaron, now three, had four-times-daily injections of insulin at first and now has a remote-controlled pump on a canula that has to be moved around his tummy every few days. Every meal, every activity, growth spurt and illness has to be analysed before Martin and his wife Lisa administer the insulin four times a day – including checking hit levels at 2am, which they take turns to do.

Eleven-year-old Natasha – or Tashi as she is known – gives all the help she can too.

“Aaron is amazing, so full of life and a right cheeky little thing,” Martin says.

“He copes really well. He can eat what he likes at meal times as long as we have the insulin levels, but he can’t have snacks in-between meals, which is hard for a three-year-old. But when his blood sugar level drops, we have to ply him with sweets – he loves that!

“Sometimes we have to give him sweets in the night if his blood sugar level has dropped and he just opens his mouth and swallows it without waking now. It’s all he’s ever known.”

He adds: “When he was first diagnosed, I felt numb; it’s just thrust upon you. He was very poorly before we found out why and we spent four days in hospital while the doctors stabilised his blood sugar levels – they were sky high.

“Since then we have all pulled together as a family, including Tashi, to understand the condition and learn what we have to do to make sure his blood sugar level stays safe. It’s hard work but we try to just get on with our lives like any family.

“JDFR have been a great support, not just funding research and sending information, but also thinking of things like a teddy with patches so that children can practice doing their injections. We want to thank them.”

Martin and Tashi are taking part in a walk on Sunday (September 22).