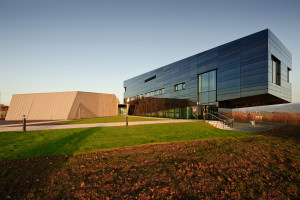 The Dalton Cumbrian Facility (DCF) is a new research base established with an initial £20 million joint investment by the University and the Nuclear Decommissioning Authority (NDA). Situated on the Westlakes Science and Technology Park, near Whitehaven, the DCF will bring world-leading academic research in nuclear energy to West Cumbria.

Now a core component of the new National Nuclear User Facility, announced as part of the Government’s Nuclear Industrial Strategy, the DCF is designed to complement and significantly expand the nuclear research and education capability of the UK’s nuclear R&D sector. The overall aims of the Facility are the delivery of world-leading nuclear research and the transfer of knowledge to industry.

Its research will focus primarily on the areas of radiation science and nuclear engineering decommissioning.

The facility is fully equipped following delivery and commissioning of a particle accelerator, the largest and most complex research equipment to be housed at DCF. It also incorporates detailed computer modelling capability and large-scale experimental laboratories, including extensive irradiation facilities and associated analytical and inspection equipment, to provide a comprehensive research environment.

The Rt Hon The Lord Hutton of Furness, who officially opened the Facility, said: “I commend The University of Manchester and the NDA for the foresight, vision and commitment they have shown in creating this new Dalton Cumbrian Facility — a world-leading facility for nuclear research, for nuclear skills development and a major driver for socio-economic growth in West Cumbria.”

Professor Colin Bailey, Vice President and Dean of the Faculty of Engineering and Physical Sciences, said: “The University of Manchester's Dalton Cumbrian Facility will integrate with the UK’s other nuclear R&D facilities to establish a truly unique and world-leading capability.

“Working closely with NNL and other nuclear stakeholders, the DCF will create a seamless team of academic researchers and industrial experts to ensure that transformational research, and the development and deployment of technologies, addresses the most challenging nuclear issues.”