A Day of Celebrations for the Alan Gilbert Learning Commons

The Alan Gilbert Learning Commons has been officially opened and named at a day of celebrations. 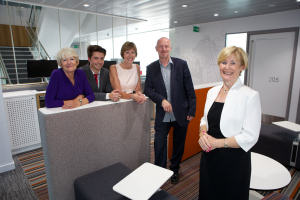 University Librarian and Director of The John Rylands Library Jan Wilkinson welcomed invited staff and external agencies who had worked to bring the £24 million state-of-the-art learning space to fruition. It was, she said, “a triumph of partnership” that included the students at every stage of the process and a fitting tribute to a man who “passionately cared about the student experience”.

Now the students call it “simply awesome”, she added.

President of the Students Union Nick Pringle said it was also affectionately known as “the Ali G”. The project had fostered a good relationship between the University and its students. He added: “I look forward to spending the next year in my new home.”

The guests took part in a variety of activities to showcase the magnificent building, including demonstrations of some of the fantastic facilities offered such as interactive touch screens and the recently launched training skills sessions.

In the evening the building was officially named by the Chancellor, Mr Tom Bloxham, at an event at which the inaugural President and Vice-Chancellor, Professor Alan Gilbert’s wife, Mrs Ingrid Gilbert, was guest of honour.

The building is named in honour of Professor Gilbert who conceived of the Learning Commons to enhance the student experience and provide a world – class learning environment.

The Chancellor also named the square in front of the Learning Commons ‘Gilbert Square’, again as a tribute to Alan who led on the largest ever capital investment programme in UK higher education.

Guests in the evening were taken on tours to view the state-of-the-art facilities in the Learning Commons as well as the student artwork and heritage features which are integral to the building.

The evening ended with a celebratory dinner at which the Chairman of the Board of Governors, Mr Anil Ruia, led the Vote of Thanks.