The Museum is asking for public support to restore and install a full Tenontosaurus skeleton, affectionately known as April 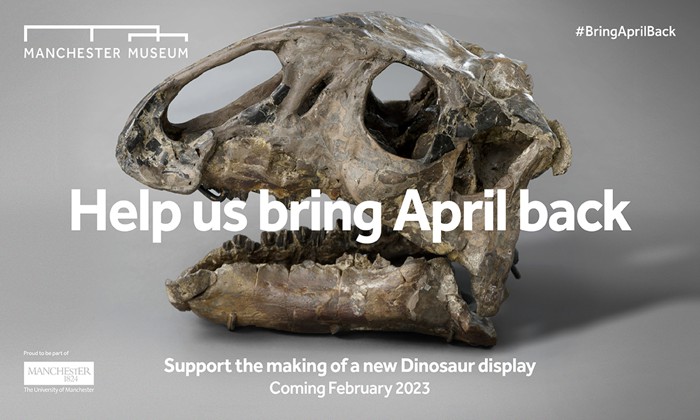 Manchester Museum is asking for public support to help raise £10,000 to restore and install a real Tenontosaurus skeleton in its Dinosaurs and Fossils gallery.

The skeleton dates to the Cretaceous period about 110 million years ago and was found in Montana, USA. It is affectionately named April after the wife of Barry James, who originally prepared the fossil for display.

It was previously displayed in the museum standing upright, however research carried out by our Earth Sciences students has shed light on how the skeleton would have walked and posed in life.

David Gelsthorpe, Curator of Earth Science Collections, says: “April is a Tenontosaurus purchased by Manchester Museum in 1999 and was previously displayed standing upright. Over the past few years, we have been working with a team of Earth Sciences students to carefully study April’s bones and find out more about her.

"Using their palaeontology skills and computer modelling, their research has helped us to better understand how she would have moved on all fours. As well as changing the way the skeleton stands, over 10,000 hours of careful conservation work is required to restore its bones.

"We’re asking for any donations, big or small, to support the project and help bring April back to the Museum floor.”

The Tenontosaurus will be the focal point of a brand-new display devoted entirely to dinosaurs opening in February 2023.  Visitors will have the opportunity to come face-to-face with prehistoric giants, get hands-on with the objects, look closely at fossils and learn the skills of palaeontology.

The history of British dinosaurs will be included in the display, as well as the story of how dinosaurs became extinct and the impact an asteroid had on the Earth. The objects the museum cares for are key to understanding topics including climate change and evolution.