The With Insight Education charity, who work in collaboration with our Access and Student Success team, was featured on ITV's Granada Reports 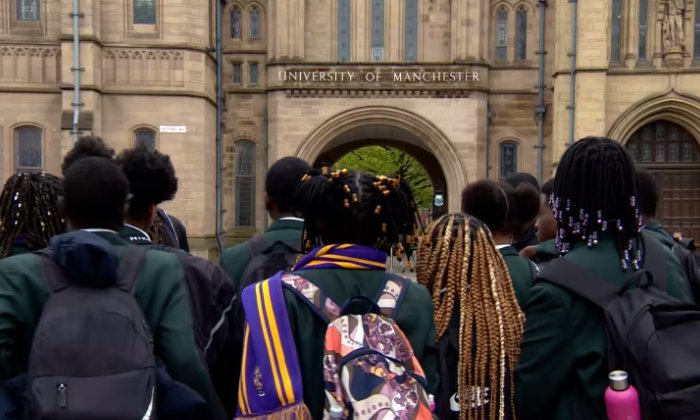 The programme is helping to empower young black-heritage pupils in the North West to progress to top ranking universities.

UCAS figures show black students consistently have the lowest entry rate to further education, something the charity With Insight Education is working hard to change. 86% of With Insight mentees secure places at top third ranked universities.

Jesy Luyengi, a first year studying mathematics at our University volunteers as a mentor.

He said: "I come from an estate where, as a black man, typically, if you want to make a life for yourself you either do it through football or become a rapper or, unfortunately, you may have to turn to a life of crime.

"I wanted something different. However it was quite difficult for me to see people doing that so that's why I decided to get involved in this programme."

Jesy and some of the other mentors are giving tours of our University to pupils from Oasis Academy, MediaCityUK and Cedar Mount Academy, Gorton.

The aim is to give them an insight into student life and how they could thrive at a top university.

Christine Kinnear, Founder and CEO of With Insight Education said: "We need to be empowering our own young people with the self belief they can go to the top universities and then supporting them along the way and this scheme does both of those things."

Academically, all the year nine pupils selected to attend the programme are already performing at a high level.

But Dwain Brandy, assistant principal at Oasis Academy MediaCityUK, says it is crucial black and global majority pupils are encouraged to realise their potential.

"That's why it's so important these black and global majority pupils come here and meet students who look like them, who talk like them."