Schools unite to raise money for NHS and 999 heroes

Two medical students have teamed up with a charity based in Manchester, raising money to build Britain’s first 999 Cenotaph to honour the 2 million people working in the NHS and emergency services 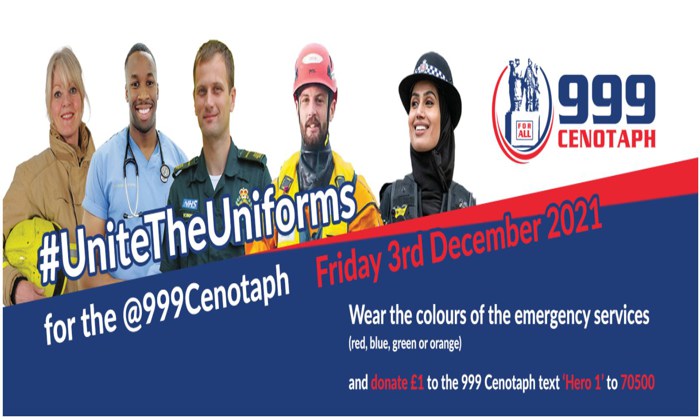 Students Hithin Noble and Maria Chowdhury approached 999 Cenotaph Founder and CEO, Tom Scholes-Fogg, with the idea of school children and students wearing orange, green, red, white or blue and paying £1, which would go towards raising the money needed to build the 999 Cenotaph. The traditional colours represent each of the emergency services, and the campaign will be managed under the name #UniteTheUniforms.The campaign is now being rolled out on 3 December 2021 for schools, colleges, sixth forms and universities nationwide.

The 999 Cenotaph is supported by HRH the Duke of Cambridge; the Prime Minister; the First Ministers of Northern Ireland, Scotland and Wales; the National Police Chiefs’ Council, the National Fire Chiefs’ Council, the Association of Ambulance CEOs; HM Coastguard; and all Search and Rescue organisations. This national monument is being sculpted by Philip Jackson CVO, whose previous work includes the Bomber Command Memorial and HM The Queen in Windsor Great Park.

The Emergency Services Cenotaph, which will be located in Westminster, includes six figures stood back-to-back wearing the uniform they would wear when responding to a 999 call. They are a police officer, firefighter, paramedic, a maritime volunteer, a search and rescue volunteer, a dog to represent service animals, and a recent addition of an NHS nurse in scrubs which was added at the start of the COVID pandemic.

Speaking about this campaign, Hithin Noble and Maria Chowdhury said: “This pandemic has put a spotlight on the hard work and resilience of our emergency services. We wanted to create a campaign to show our collective appreciation. The 999 Cenotaph is a monument to provide a permanent symbol to recognise the efforts of our skilled and selfless heroes, and we are truly proud to support this.

"We hope to create a fitting tribute that both commemorates our country’s frontline workers and inspire the next generation of lifesavers. By standing in solidarity on this day, we are showing our support, to those who dedicated their lives to protect us.”

Tom Scholes-Fogg, Founder and Chief Executive of the 999 Cenotaph, said: “We are excited to be working with Hithin and Maria to promote the heroic work being done by the NHS and emergency services. This campaign is also an opportunity to engage with the next generation of police officers, firefighters, paramedics and search and rescue workers.